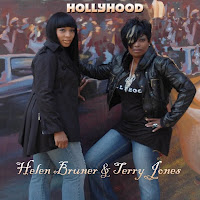 This duo are totally new to me, and I was not certain as to what I may find, going by the title of the album and the cover. Having eyed it warily and thinking 'oh dear, here we go again' I am much relieved that within a few seconds my grossly and wildly inaccurate assumptions have - yet again - been laid to rest. This lovely little independent set is as soulful as you like and will definitely be up your street if you like mid-uptempo funky soul laced with real instruments, sass and soul! There is none of this crass girlie R&B drivel which I thoroughly expected. Instead we are treated to passionate vocals with energy and soul and very much NOT in the recent vogue of whining and vocalising. The wah-wah guitar, synths and live drums are totally in the right zone for me and tracks that I assumed would be crass urban rap nursery rhymes such as "Holla" could not be further removed from this.

having been so nicely surprised I have settled into this album very quickly and have warmed to these young Ladies in a big way. Who could be surprised, really, when young Miss Terry Jones has none other than the legendary Linda Jones whose recent "Soul talking" had the song "Baby I Know" earning a Grammy nomination for best traditional R&B performance. Talent, then, runs in the family! Fans of Rufus will easily find something in the opening song, "Better", to make them feel right at home. The great rhythm, scratchy guitar and spacey synth combined with the zestful soaring vocals easily wipe the floor with the likes of Mary J Bilge (sic) and all the other R&B nasal whiners and vocalisers clogging the airwaves like a blocked sewer. As far as this grumpy old, dyed in the wool toad is concerned, I am happy to pay full purchase price for this track alone. Thankfully there are far more gems on here, including the aforementioned "Holla" with it's funky 70's vibe. Superb! The dreaded title of "Hollyhood" is of course NOT a street dirge but another fizzing funky soulful number and a piece of social commentary to boot.

"You Know" me with it's clapping beat and stabbing synth/horns contains some great 80s styled warbling guitar and yet again a great, uptempo rhythm that is very much in the yester-now bag. "Miss Mary" has a nice vibe and the melody reminds me of something that I would have heard on something purchased in the 1986 - 1989 period. More social commentary and well worth a spin not only at home but on quality radio too. This being good, though, is surpassed by the SUPERB feel-good vibe of "Let You Go", a song that Rufus and Chaka Khan could easily have tackled in the early 1980s. This vibe would easily be welcome on an Eric Benét set, or even Rahsaan Patterson album. Truth is, if you loves these songs - and I know you will - you will appreciate the rest of the album. It's a genuine pleasure to hear these sorts of tunes emanating from artists flush with youth. Please check out this album and simply pop it on, enjoy it and smile widely.